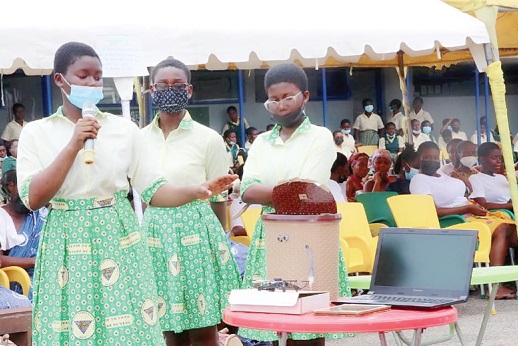 It, therefore, makes it possible for one to put in a refuse without physically touching the lid to open it.

The device, known as electrobin, is powered by battery or connected to a charged laptop.

It was unveiled on the premises of Aburi Girls Senior High School at Aburi in the Akuapem South municipality in the Eastern Region to mark the International Day of Mathematics.

The event also saw pupils and students from basic and junior high schools within the area display talking drums, poetry recitals and dance to communicate in mathematics

The event, with the theme: “Mathematics Unites,” was organised by the Akuapem South Municipal Education Directorate.

She stated that she bought a normal refuse bin, cut the lid with mathematical calculations and was able to attach it with a motor with a hole inside for the ultrasonic sensor and put in the code for the whole bin to work out.

The new device, which Miss Agyeman stated was invented during the peak period of the COVID-19 pandemic, was to prevent people from touching the lid of the refuse bin when disposing of refuse.

She explained that it was unhygienic to wash one’s hands and then touch a lid of a refuse bin during this period of the COVID-19 pandemic.

The Akuapem South Municipal Education Director, Mustapha Haruna, who said he was excited about the new invention, advised the students to be serious with the study of Mathematics to be more innovative.

He said students must brush aside the notion that Mathematics was difficult and study it since that was the only way to climb the academic ladder.

A Science tutor of the school who had been assisting the students to come up with new innovations, Seth Frimpong, said the bins were suitable for use in offices because there would not be the need for hand washing after dumping refuse in bins.

According to him, the development and application of technology must start from the schools, which would consequently impact on the economy.

That, Mr Frimpong said, was because students were the future leaders and had to be trained to take over from the adults in the future.

He noted that tutors of the school had formed a club to develop students’ interest in the study of Science Technology, Engineering, Arts and Design and Mathematics (STEAM).

That, he said, would enable the students to come up with innovations to improve the living conditions of the people.

The students, he intimated, were given the opportunity to explore and come up with whatever they had in mind after which the tutors would correct them and put their innovations