The Asantehene, Otumfuo Osei Tutu II, has stressed the importance of promoting the use of local languages in the country. 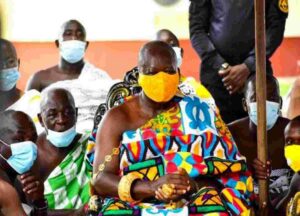 He has called on Ghanaians to guard jealously against the various local languages “as they define and promote the collective interest of Ghanaians.

According to the Asantehene “this is the time for all and sundry to develop the interest in the study and speaking of the local languages;we need to heighten and revive them to redefine us as a people.”

Otumfuo Osei Tutu said this in a speech read on his behalf by the new Asafohene, Nana Akyeamfuor Asafo Boakye Agyemang Bonsu, at the final of the maiden Otumfuo Community Reading Challenge at the Manhyia Palace, last Friday.

The Asantehene said the era where using the local language, especially Twi was considered demeaning was over and that it was time to encourage every Ghanaian to have a mastery of their local dialect.

The Asantehene encouraged the students to have a mastery of both the English and Twi because “the English language is important in advancing and“But the importance of the Ghanaian local languages must not be lost on us as a people, it is the reason we need to promote and protect our heritage including language which defines us,” Otumfuo emphasised.

The Minister of Education, Dr Osei Yaw Adu-Twum, said reading and writing were two key ingredients that transformed societies and there was the need to attach more importance to them, stressing that the lack of them, which had been termed “learning poverty,” must be changed through a deliberate policy.

The 60-community reading competition featuring 5,500 students in the Kumasi Metropolis was initiated and organised by the Otumfuo Foundation to promote English and Twi reading among JHS student.

The competition which was won by the only male student out of five finalists, George Dame of the Anomangye M/A JHS, tested their proficiency in both the Twi and English languages. enhancing world transactions.”

He was followed by his closest rival, Harriet Appiah of the Good Shepherd R/C School representing the Ahinsan community.

George won with 71.4 score point as against 71.1 by Harriet while Nhyira A. Ohemeng representing the Adum community placed third with 70.2 score.

Aside the final communities — Atasomanso, Asokore Mampong, Anomangye, Adum and Ahinsan — winners at each stage of the challenge were recognised with tablets and other gifts.