President Nana Addo Dankwa Akufo-Addo yesterday cut the sod for the construction of the Accra Science, Technology, Engineering and Mathematics Academy (Accra STEM Academy) as part of the transformation agenda to provide students with 21st-century skills and hands-on knowledge in problem-solving. 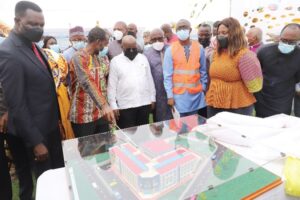 This will include offering students with knowledge in computer science, robotics and artificial intelligence, creativity, communication and collaboration.

The academy, the first of 16 being constructed throughout the country, will also have a number of state-of-the-art facilities, including a four-storey, 28-unit classroom block, 14 science laboratories, a sickbay, an administrative area, a staff common room, a library, washrooms, a canteen and a 1,500-seater multi-purpose hall.

Being constructed at a cost of GH¢32 million, the academy will admit learners from kindergarten to senior high school (SHS).

Located on the premises of the National Vocational Training Institute (NVTI) at East Legon in Accra, the academy, which will have a population of 2,000 at a time, is expected to be completed within 24 months.

Aside from the academies, the government has also commenced the development of 20 STEM centres and 10 model STEM SHSs across the country which are at various stages of completion, with some of them becoming operational this year.

Speaking at the sod-cutting ceremony, President Akufo-Addo said the Accra STEM Academy would also be a place where learners in junior high school (JHS) would be provided with the option of studying basic engineering, manufacturing and global studies to help them make informed decisions on their preferred programmes of choice at the SHS level.

I am excited that as a fully inclusive school, students with learning difficulties, as well as gifted and talented students, will find a suitable home.

“The Accra STEM Academy is a Ghana project and we can thus be sure that Ghana’s young people are going to acquire skills that will put them at par with their peers anywhere in the world,” he added.

The President said it was his expectation that parents and students would take advantage of the opportunity provided by the facility and enrol in the STEM Academy.

“The government is committed to accelerating STEM education in Ghana to train students with cutting-edge 21st century skill. God willing, within the next 24 months we’ll all be back here to witness the inauguration of our STEM Academy,” he said.

He said the institutions and the centres would be fitted with state-of-the-art equipment and laboratories to facilitate teaching and learning in all areas of study, including artificial intelligence and robotics.

Door of no return

President Akufo-Addo expressed worry over the fact that since 1987, education reforms in Ghana had provided a door of no return, where high school students were boxed to career pathways and could not change their programmes of study.

Our current six-year secondary school system being operationalised as two disconnected three-year system continues to be a major hindrance to the growth of our educational system,” he said.

Ghana, he said, had been blessed with the best and brightest on the continent who could help unleash the country’s potential and make it an active participant in the fourth Industrial Revolution.

The President explained that in accordance with the government’s educational strategic plan targeted at increasing Ghana’s Science and Humanities ratio from the current 40 to 60 to the desired 60 to 40 in favour of Science, it was repositioning the educational system on STEM education.

He indicated that the world was driven by technology, energy, industry, agriculture, medicine and health, clean air and water, transportation, sanitation, management and the conservation of natural resources.

The successful exploitation of those sectors, he indicated, depended on the application of science and technology, noting: “A country’s evolution is a function of its ability to understand, adopt, produce and commercialise scientific and technological knowledge in ways appropriate to its culture, aspirations and level of development.

The Minister of Education, Dr Yaw Osei Adutwum, noted that the Akufo-Addo government had commenced educational renaissance in Africa because the vision of the President was that if education was not transformed, it could not play its rightful role of boosting the economy.

“In the fourth Industrial Revolution, our students should be learning in spaces and other things that will change their minds; therefore, the academy is the beginning of this transformation agenda,” the minister said.

The Member of Parliament (MP) for Ayawaso West Wuogon, Ms Lydia Seyram Alhassan, said although the constituency was considered one of the elite communities in the country, it had no SHS, for which reason she welcomed the construction of the academy in the constituency.