The award winning robotic lead teacher at the Science Department of Obuasi Senior High Technical is advocating for ferrite bead chargers for laptops.

The  Tutor is advocating for the provision of ferrite bead chargers for any supplied or purchased laptops to ensure that the product will function effectively.

Explaining his point, Mr. Solomon Nchor believes that integrating the ferrite bead in the design of the charger has some advantages for the product

Stating his point on the subject, Solomon Nchor intimated that “Every wire is a potential receiver or transmitter of electromagnetic waves or acts as an antenna. The ferrite bead or choke on the charger of the laptop computer acts as frequency canceller to the high frequency alternating current.

The length of wire from the charger acts as an antenna and gladly picks up broadcasts from cell phones, TV and radio stations, as well as the nearest microwave oven. Modern electronics are very sensitive to even small alternating current signals. The ferrite bead is there to stop them. If it isn’t there, your laptop could interfere with these waves and function unusually. The absence of the ferrite bead on the charger of any laptops could cause interference . I will advise that if you are using a laptop without ferrite bead on the chargers, then u need to get one to protect your laptops. Anyone who may be complaining of some irregular observations when they switch on their laptops may be due to interference due to the absence of ferrite beads on the chargers.

Mr. Nchor has led Obuasi Senior High Technical to win many laurels and have come out with many innovativations over the year. He led his school to pick Awards in Sci-Tech Innovation Challenge, UNDP Waste Management Challenge among many others. 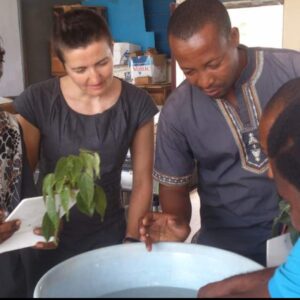 About Ferrite Beads on Laptops

We all have a basic idea about the purpose of each wire going in and out of our computer. But a few wires seem a bit off when it comes to their appearance. They have a cylindrical bead dangling near the end. So what’s this bead doing on that wire and what purpose does it serve? Today, we are going to unravel this mystery for you.
Ferrite bead

You will not only find this bead at end of charging cables but also mouse, keyboard and other peripheral cables. It turns out that lump’s called a ferrite bead or, more generically, a choke. It’s a fancy name for what’s basically an electromagnetic wave-bouncer. If you open this bead, you will not find any complex circuits but only a ferrite cylinder that is magnetic in nature. It is this magnetic quality of the bead that serves the purpose.

So basically, when current passes through any cable, it generates electromagnetic interference (EMI). Your electronic gadgets also produce EMI during operation. For example, if you connect a camera to your monitor, the camera would produce intereference and cause your monitor to flicker without the presence of a ferrite bead. If left unabated, EMI can wreck havoc with your computer peripherals. 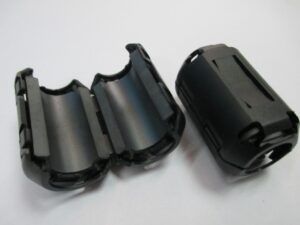 electromagneticMagnetic Field
These ferrite chokes ensure that signals are only sent in the intended directions and no EMI is transmitted between the peripherals. The choke dampens these EMI waves by acting as an EMI blocker.

The blocking is most effective when it is near the source of the EMI, thats why you will only find these ferrite beads near the end of the cables. So, this little mystery is now solved! These tiny cyst-like beads make sure that our computer peripherals work properly and don’t cause any issues for the computer itself.