The star girl of the 2021 National Science and Maths Quiz (NSMQ), Francisca Lamini, is on her way to the Harvard Medical School.

This was announced by the American Chamber of Commerce in Ghana through its LinkedIn page.

Francisca Lamini caught the attention of the nation with her sterling performance during the NSMQ and although her school, Keta Senior High School, did not win the ultimate, her contributions took the school to its first finals ever.

Also, she became the first female to be at the NSMQ finals in eight years, getting so much plaudits for herself and her school.

After receiving several offers from across many spectrums, the American Chamber of Commerce in Ghana has also announced that Francisca is headed for the Harvard Medical School.

“It was great having the young, intelligent Francisca Lamini at the secretariat earlier today before she leaves for her studies at the prestigious Harvard Medical School,” a caption to a photo together with the star girl said.

Here are some fun facts about Francisca Lamini as earlier published by GhanaWeb:

First female student from Keta to reach the finals of NSMQ

Francisca is among the squad to grant Keta Senior High Technical School their first entry into the finals of the competition.

Scored 8As in NOV-DEC

Francisca Lamini has an enviable academic success as she has excelled in all stages of her education.

While in her second year at Keta SHTS, she sat as a private candidate for the West African Senior School Certificate Examination (WASSCE) and scored ‘As’ in all her core and elective subjects.

Although the competition has ended, Miss Lamini continues to enjoy public and media attention. Several others have also awarded her with cash prizes for her performance at the 2021 NSMQ. 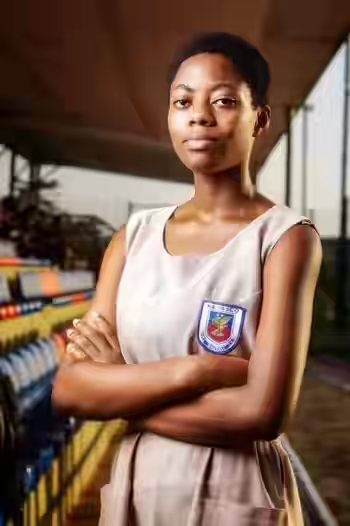