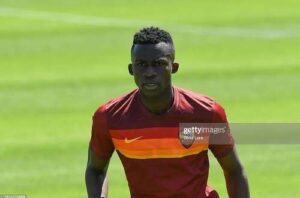 According to Akoma Fm in Kumasi, highly rated Roma youngster Felix Afena Gyan will once again decline the invitation of Ghana to feature in the Afcon Tournament. This follows an appeal by his agent and family to the Ghana Football Association.

Akoma FM can exclusively confirm that AS ROMA youngster, Felix Afena-Gyan will not Honour the Black Stars invitation.

The Roma forward was earlier named in Coach Milovan Rajevach’s 30-man Provisional Squad for the AFCON in Cameroon next month.

However, our investigations reveal that the agent and guardians of the talented Striker have written to the Football Association to thank them for the invitation but however added that the player is currently not ready to feature for Ghana at the moment. This is to enable him settle down and command some game time under his Coach Jose Mourinho.

Our sources from the FA Quarters also has it that the FA will conditionally accept his request if the player agrees to be part of the World Cup play-offs. The Roma striker per our checks will only make a decision on his international career after the season.