Latest Update Teachers Need To Know From Ministry Of Education. 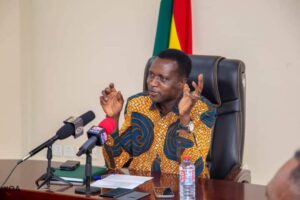 The Minister of Education, Dr. Yaw Osei Adutwum, has stated that the Ghana Education Service’s administration will try to promote instructors from Senior Superintendent II to Senior Superintendent I (junior ranks) as soon as possible. This was taken from an interview with Dr. Yaw Osei Adutwum on Peace FM’s Kokrokoo Morning Show on Monday, February 8, 2022. Dr. Yaw Osei Adutwum remarked during a Kokrokoo interview on peace FM that the promotion of teachers at the Senior Ranks is based on the Examination, and that any teacher who takes the test and gets a pass grade is immediately placed on the correct scale. Teachers who are due for a promotion at the lower levels are overseen at the district level.

Dr. Adutwum went on to say that he was covertly added to one teacher’s platform (name omitted) and that the majority of the group members were unaware of his presence. He stated that he has discovered that the majority of instructors have been protesting about junior-level promotions (promotion from SSII to SSI).

According to the Minister, his examination at the GES found that the majority of them have not been promoted in four to five years. He went on to say that he was driven through the Ghana Education Service offices one day and met ten teachers.

A hungry teacher, according to the minister, can never deliver properly. It is the government that suffers if a teacher is due for promotion and the promotion is delayed. Because the government will have to pay the instructor that money one day. However, the instructor was not paid at the time he was scheduled to be paid to make him happy so that he would work hard for the government. “The Ghana Education Service’s administration will work on this to guarantee that every teacher is promoted swiftly,” stated Dr. Yaw Osei Adutwum.