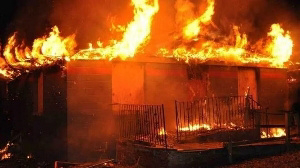 The unfortunate incident, which has caused damage to properties worth thousands of Ghana cedis allegedly seemed to have been triggered by a low voltage drop experienced in the area and some other parts of the Mfantseman Municipality.

It has been allegedly reported that about four students were affected during the development and on admission at the Municipal Government Hospital at Saltpond receiving treatment.

Speaking in an interview, some of the staff asserted that, the fire outbreak was first noticed by

Reaching Mr. Isaac Kobina Amoah popularly known by many as Osofo, one of the staff added that, the timely intervention of the staff and students brought the situation under control before the arrival of the Ghana National Fire Service personnel from Cape Coast, either than that, the situation has been worst.

He indicated that several attempts made to reach the nearest Ghana National Fire Service personnel in the Mfantseman Municipality proved futile.

“When other people see fire, they begin to run away, but the staff and students were able to manage the fire and I must applaud them for that bold and brave step,” he said.

The report gathered has revealed that the situation will affect teaching and learning as fear gripped the students and staff.

Further investigation is ongoing to ascertain the exact cause of the fire.

They, therefore, called on stakeholders, philanthropists, NGOs, the MCE, Mr. Ike Lord Ennu, Mrs. Ophelia Mensah Hayford, MP for the area, and the Municipality Assembly to attend to the urgent need of the facility.