Teachers In Fear: Pig head in basin found at basic school at Mpintsin

Teachers In Fear: Pig head in basin found at basic school at Mpintsin 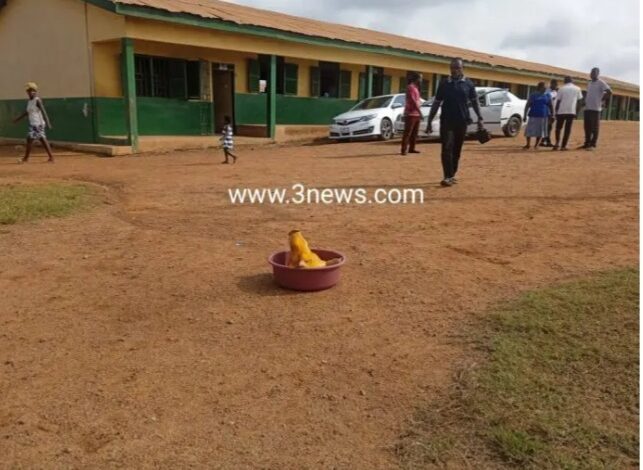 Teachers and pupils of the Mpintsin AME Zion Basic School in the Sekondi-Takoradi metropolis of the Western Region were left in a state of fear and trepidation on the morning of Tuesday, February 22 when they went to school.

Sitting in the middle of the school’s compound was a small rubber basin with the severed head of a pig smeared with palm oil and resting in a heap of cooked rice in what appeared to be a ritual.

It was a group of curious pupils who first went to inspect the basin and its content and what greeted their eyes could only leave them screaming and running towards the direction of their teachers.

Interestingly, Tuesday’s “ritual” was not the first the school had witnessed as this will later be confirmed by the Chairman of the School’s Management Committee, John Bissiw.

But according to John Bissiw, “this one is unique and quite intimidating than previous ones”.

“I received a call about the rather strange incident at the school. So, I informed the Chief of the town about it. The Chief together with his elders, after series of consultations, came to take the item away,” he told Connect FM.

He mentioned that a meeting will be held to take a decisive decision on how to prevent the “ritual” from happening again.

However, some teachers at the school who pleaded anonymity say they are not happy with how some people find it convenient to plant such items at a basic school without considering the effect it will have on the children.

“This is not good. You come to school highly motivated to teach and this is what greets you. Sometimes, when it happens like that the kids will be moody throughout. And we have to do a lot of counselling before they are able to get their minds off it. Something must be done about it. It is frustrating.”