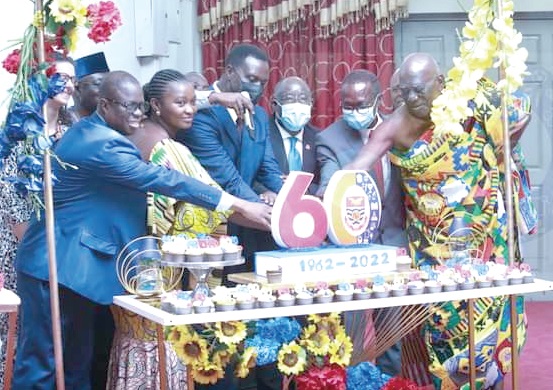 Dr Yaw Adutwum (middle), Minister of Education, being assisted by other dignitaries to cut the 60th anniversary cake

The University of Cape Coast (UCC) has launched its 60th-anniversary celebration with a commitment to pursue excellence in the training of its students.

The celebration is on the theme: “60 Years of Quality Higher Education: Expanding the Frontiers.”

The Vice-Chancellor of the UCC, Professor Johnson Nyarko Boampong, stated that the university would continue to expand its programmes in order to meet the needs of modern industry and society.

He remarked that the university had made considerable efforts over the years to strengthen the country’s human capital foundation by developing entrepreneurship programmes and enacting policies to help train the nation’s labour force.

“Even with the constraints on our resources, we have strived to meet our needs and we will continue to be pacesetters in training the labour force of this country.”

He emphasised that the 60th anniversary signified the start of even better things to come “as well as a year of consolidation of our achievements. We are poised to work together to play a key role in the transformation of the country and continent’s.”

Today’s article guide shall walk you through the UCC Launches 60th Anniversary Celebration.

The Minister of Education, Dr Yaw Adutwum, launched the 60th anniversary and urged the university to respond to Science, Technology, Engineering and Mathematics (STEM) education and increase access to it.

He emphasised that the government’s educational reforms were based on STEM to equip the youth to be active participants in the fourth industrial revolution and that it was critical that all relevant stakeholders came on board to support the move.

He emphasised that the reforms were required to foster learning in contemporary skills, creativity, critical thinking and communication in order to propel the country to economic development.

“We are in an era where synergy between the electronic and biological is very critical and also in the era of artificial intelligence which is defining almost everything we do.”

He urged the university to lead in education reforms to provide students with the necessary skills they needed to thrive in modern society.

“Students must be encouraged to add value to what they are taught and they must be given the tools they need to address the challenges of the fourth industrial revolution. Education reform should not be left to the Education Ministry. Countries that are rapidly transforming their education systems are doing so because they recognised that education was the way ahead and made the required modifications to meet standards,” he stated.

The British High Commissioner to Ghana, Harriet Thompson, expressed her support for the university and encouraged students to take advantage of the many internship opportunities and national service slots provided by the UK government.

She stated that the United Kingdom would continue to partner the university to improve education.