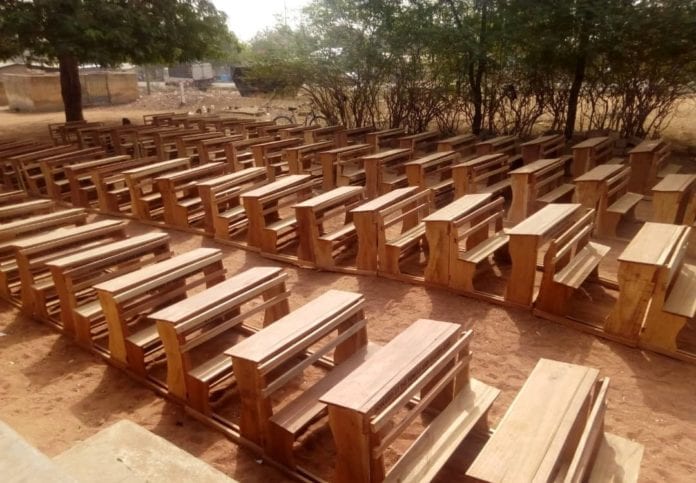 The Jackson College of Education (JCE), a private institution in Kumasi, has presented 100 dual desks to the Zaare Experimental Primary School in the Bolgatanga Municipality of the Upper East Region to improve quality academic activities.

The primary school, with a population of about 200 pupils, has about 50 pieces of furniture for a few, while the rest of the pupils sat on the floor.

“When they sent their report after the teaching practice, I realized that the children were lying on their bellies and the student-teachers were struggling to squat and teach them. I was so sad and decided that something must be done to support the school,” she said.

Mrs Jackson, who also presented boxes of soft drinks to the pupils through the school’s management, said with a total population of 200 pupils in the school, the 100 dual desks would be sufficient to alleviate the plight of the children.

The Principal said management of the JCE, which also had a Learning Centre in Bolgatanga, was happy to contribute to the quality of basic education in the Region and the country as a whole, adding that, education should not be left solely to government, “People should come in and help, they are our children.

“And some of them will grow to occupy responsible positions in society, so, we should not just look-on as though it is normal for the pupils to lie on their bellies and write, especially in the center of Bolgatanga,” Mrs Jackson added.

She said apart from the College’s focus on improving quality education through the provision of basic educational logistics to schools to augment government’s efforts, it had over the years extended support to other state institutions including security agencies.

Mr Rex Asanga, the Bolgatanga Municipal Chief Executive (MCE), thanked the principal, management, and students of the JCE for the gesture and show of interest in the quality of basic education, “To say that we are overly excited, is an understatement, and we are grateful to the principal for the gesture.”

The Headmistress of the Zaare Experimental Primary School, Madam Gladys Asokamah Nsoh, who was grateful to the College, said lying on the floor to write made the pupils appear dirty most of the time.

She said the furniture would not only improve learning in the school, but help the pupils appear neat and save their parents the cost involved in maintaining their uniforms almost every academic term, “So we are very grateful to Jackson College of Education. God bless them.

“We want to also use this opportunity to appeal to individuals, philanthropists and organizations to support the school in any form to improve teaching and learning,” Madam Nsoh said.